There are more Halloween costumes out there than you could even begin to count. With the spooky season in full swing, fans have been preparing their go-to costume all month, and the big day is just before us. Tomorrow, all kinds of costumes will hit the streets as kids trick-or-treat, and one family has all but guaranteed their son a huge haul thanks to his Saiyan costume.

Over on Reddit, an account called jjjjjjjj6690 posted a photo which anime fans flocked to. The user put up a picture of their son in his Halloween costume for this year, and it pulls directly from Dragon Ball Z.

As you can see below, the Halloween costume brings Future Trunks to life with impressive ease. The 6-year-old has on a bright purple jacket with a big Capsule Corps patch ironed on one sleeve. With a black shirt underneath, the costume completes its outfit with a belt, dark jeans, and a pair of warm shoes. 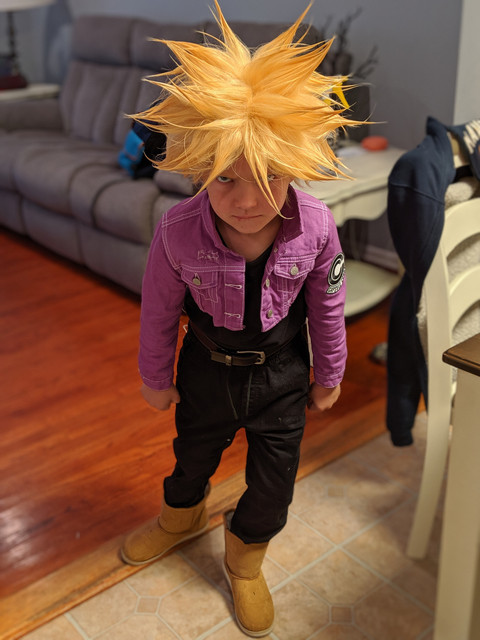 Of course, Trunks has taken things to the next level with this costume. The hero has gone Super Saiyan, and the kid is selling the form. One look at his narrowed face is all it takes to warn fellow trick-or-treaters away if they so much as think of stealing his candy.

When it comes to Dragon Ball costumes for kids, this look is a clear winner. The only thing that could make it better would be if his parents dressed up like Vegeta and Bulma. If he has a younger sibling in the mix, the family could even bring Bulla to life with a costume. Such a coordinated look would wow the family into extra candy this Halloween… that is, if Goku doesn’t try to eat it all!

Which Dragon Ball fighter should this kid dress up as next year? Let me know in the comments or hit me up on Twitter @MeganPetersCB to talk all things comics and anime!